What does it mean to be an American abroad? Five Fulbright 75th Anniversary Legacy Alumni Ambassadors reflect and analyze how their personal identities affected their Fulbright experience. 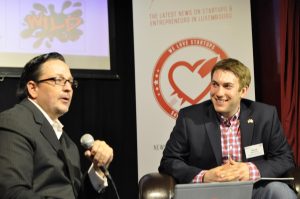 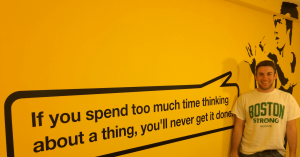 David N. Bernstein (right) is a Clinical Fellow in Orthopaedic Surgery at Harvard Medical School. While on his Fulbright in the Grand Duchy of Luxembourg, David earned a master’s degree in entrepreneurship and innovation from the University of Luxembourg. As part of his degree program, David interned at Silicon Luxembourg, a rapidly growing media and event planning startup designed to highlight the blossoming entrepreneurial spirit within the country.

“Everyone, the American is here!”

I had only been in Luxembourg for a few weeks in fall 2013, but I had already become a regular at Pitcher, a favorite local bar throughout the Grand Duchy. With a pint of Bofferding in hand, I would discuss my experience living in Europe, as well as what it was like to live in the United States, with a few of my closest Luxembourgish friends.

From business to education, and everything in between, my friends and I covered a lot of ground in our conversations. However, I began to realize an error in my approach. As a Fulbrighter, I had committed to representing the United States as a cultural ambassador. Thus, while my opinion was important, I had an obligation to share differing positions and viewpoints held by other Americans to share a complete picture of the United States.

As I reflect on my time in Luxembourg nearly a decade later, I realize that sharing and discussing varying perspectives on life and policy in the United States strengthened my identity as an American. Indeed, the power of the United States is in its rich diversity of people and ideas, as well as its endless opportunities. This idea was solidified sitting on a barstool with a beer in hand, surrounded by my Luxembourgish friends. While I consider myself a citizen of the world, I am forever proud to be an American. 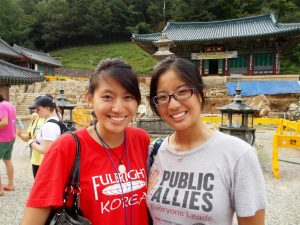 On her Fulbright, Kristine Lin (left) taught English to elementary students at Jeungan Elementary School in Cheongju, South Korea. During winter break, she used a Fulbright Korea Alumni Foundation Community Grant to support and lead an English camp, which focused on improving student understanding of American culture and traditions through hands-on activities.

Before my Fulbright, I was excited to immerse myself in Korean culture and experience as much as possible. I did not anticipate, however, having to explain my own identity while living abroad. Growing up in the United States, I was used to identifying myself as Chinese; when I arrived in South Korea, that changed.

Living outside of major cities with large foreign communities, I found myself explaining my American identity in response to quizzical looks from local Koreans. I was sometimes the first American they encountered, and I didn’t look like the blonde hair, blue-eyed person they expected.

Using my limited Korean language skills, I explained I was Chinese American, as my parents were born in Hong Kong and Taiwan, and I was born and raised in the United States. I soon took pride in being different than the “typical” American that many expected to see and turned it into a learning opportunity.

It became my mission to teach my elementary school students about the racial and cultural diversity in the United States, and I even recruited another Fulbright English Teaching Assistant to co-teach a winter camp on American culture. Using my racial identity to help teach students was never something that had occurred to me before. However, I found it to be not only an eye-opening experience for my students, but also an empowering experience for myself. 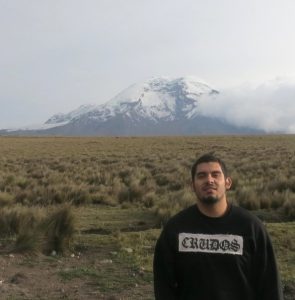 Davíd with El Chimboraso in the background, the largest volcano in Ecuador and the closest point to the moon on Earth. 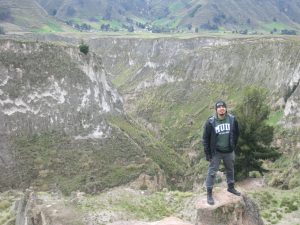 Davíd en route to Quilotoa, a water-filled crater lake and the most western volcano in the Ecuadorian Andes. 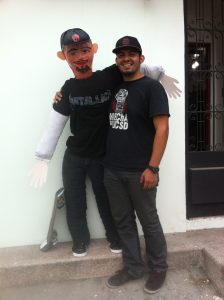 Davíd posing next to his año viejo, an effigy made in his image as a loving joke by his friends, that was burned in the traditional Guayaquil New Year Festivals of 2014.

Davíd Morales is a scholar, educator, and community activist interested in education as a tool for social change. He is currently a doctoral student and researcher in the Race, Inequality, and Language in Education program at Stanford University. He has taught language, culture, and critical thinking in public schools in San Diego, San Jose, and San Francisco, and in Ecuador as a Fulbright U.S. Student ETA.

The first time I was called a fake American, a half-gringo, I laughed. It was a joke. It was fine. Actually, it was better than fine because I never really considered myself an American anyways, let alone a gringo.

We could get into the complexity of what they, I, we, the world, mean by “American” (as I write to you from one of the two continents baptized “America”s by European colonizers), but it is enough to mention that there is no doubt that the United States has monopolized this identifier.

As for gringo–let’s just say that when I was growing up in the Latinx community of Barrio Logan in San Diego, California, gringos were the white people who lived by the beach with the double garages and the 9-speed road bikes. So, you can imagine my laugh, my “if only they knew” smirk, when my students in Guayaquil—where I was doing my Fulbright English Teaching Assistantship—would call me a “fake American,” a “half gringo.”

I was born in the United States to migrant parents from Mexico in search of the elusive “American Dream.” I have navigated this country as a brown boy and a brown man; my Indigenous ancestors account for the pigmentation of my skin that I was ashamed of, along with my language, and culture. I wanted to be white, with everything that being white entails.

After I finally got to learn about my people’s history and culture in high school—the struggles they faced and movements they led, their brilliance and resiliency—I became empowered and sought to reclaim and embrace my identity– a counter-identity to the essentializing “American” identifier.

But after a couple of months, a couple more jokes, and a couple more skeptical comments about whether I could teach English because I am not really an American, it suddenly dawned on me. It happened when I was asked to teach a lesson on Thanksgiving. It’s not just about turkey, mashed potatoes, and laughter around the dinner table every fourth Thursday of November. It is also about broken treaties, pain, remembering, and mourning of one’s ancestors and land. It is not just about a standardized and monolingual version of English, it is also about a fluid, dynamic, and ever-evolving way of using English, inspired by many other languages and ways of understanding the world.

It dawned on me I am, and have been part of, this American experience. So have my parents, so have my friends, so has my community, and so have many others who do not fit the typical American image that is exported throughout the world. 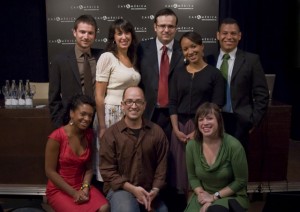 Cris Ramón (back right) is a senior policy analyst with Bipartisan Center’s Immigration Project. On his Fulbright, Cris Ramón studied the legal rights of immigrants, specifically analyzing the legal impact of seven sentences issued by the Spanish Constitutional Court against the Ley Orgánica 8/2000, a reform of Spain’s main immigration law.

As the son of Salvadoran immigrants and student of Spanish immigration policy, I saw that Spain, and many European countries, struggled with welcoming and integrating immigrants, and that immigrants in Spain and Europe also dealt with xenophobia and racism.

While on my Fulbright in Spain, my family’s experience in the United States allowed me to speak to different audiences about the benefits of immigration and effective immigration policy. I helped people in Spain understand the complexities of the immigrant experience and the importance of societal integration through welcoming communities. I also spoke with policymakers about the importance of humane migration, using my mom’s story of receiving legal status through the 1986 Immigration Reform and Control Act to note that pragmatic, humane policies can produce better outcomes.

Although I will never know if my conversations changed any minds or policy outcomes, it allowed me to move forward with my career as an immigration policy analyst who produces better policies for addressing the challenges and opportunities that immigration presents to the United States and Europe. 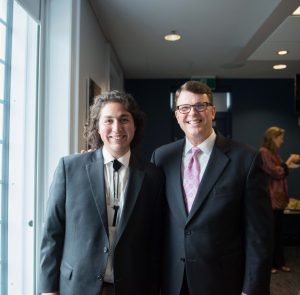 Strengthening My Identity in A Foreign Context

Vince Redhouse (left, with the U.S. Ambassador to Australia), the 2015 Anne Wexler Fulbright Scholarship in Public Policy recipient, studied at the Australian National University (ANU) in Canberra, where he completed an MPhil in Philosophy under the supervision of Robert E. Goodin. Vince’s thesis focused on the topic of political reconciliation between settler states and their indigenous citizens.

I am a member of the Navajo Nation. Throughout my Fulbright in Australia, I was challenged again and again as to what that meant and why that should matter.

Most of the time, these challenges made sense. My Fulbright research concluded that Indigenous peoples ought to be able to secede and that their respective colonial states should support their choice.

Sometimes, though, the challenges were less academic. Those challenges often came in the form of slurs and insults hurled on the streets or while riding public transport, or from people who simply felt like they deserved an explanation to satisfy their curiosity.

I ignored those particular challenges. Explaining one’s ethnicity and background is not a position that minority peoples like to be placed in. Sometimes, though, it’s good to place ourselves in that position so that we can truly educate others. In doing so, we might just discover new things about ourselves.

Throughout my Fulbright, I subjected my identity to the rigors of foreign worlds and foreign ideas, and, in the end, my identity is stronger for it.

Putting the finishing touches on your Fulbright Public Policy Fellowship application? Make sure you’ve reviewed the online tips and tutorial.