This Native American Heritage Month, we’re highlighting the contributions of outstanding Fulbrighters who live the Fulbright mission through the ways in which they express their identities and their goals. In this Q&A, Fulbright Student Alumni Ambassador Vince Redhouse shares his experiences in Australia, where he learned about the relationship between Indigenous communities and the law. 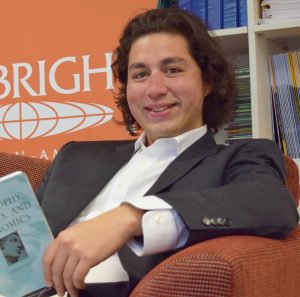 Vince Redhouse, the 2015 Anne Wexler Fulbright Scholarship in Public Policy recipient, studied at the Australian National University (ANU) in Canberra, where he completed an MPhil in Philosophy under the supervision of Robert E. Goodin. Vince’s thesis focused on the topic of political reconciliation between settler states and their indigenous citizens. In addition to his master’s program, Vince tutored for a course on Indigenous Culture through ANU’s Centre for Aboriginal Economic Policy Research, was a Visiting Research Fellow at the University of Canberra’s Centre for Deliberative Democracy and Global Governance, gave a TEDx presentation, and through support from both the ANU and the Lois Roth Endowment, visited Utopia, an indigenous community in the Northern Territory, where he was able to learn firsthand some of the issues Indigenous Australians face.

Vince: My path was different than most. I am a first-generation college student and prior to my junior year of college, I had never heard of Fulbright! I was fortunate that one of my advisers recommended the program to me. There were two things that inspired me to apply: 1. An interest in the relationship between foreign Indigenous people and their settler colonial government; and 2. The opportunity to see if academia was right for me.

Vince: My Fulbright was for a two-year research degree: a Master of Philosophy (MPhil) in Philosophy at the Australian National University. My initial proposal was to examine and apply contemporary deliberative practices to see whether they could be used to dispel the false beliefs that societies hold about Indigenous peoples. What my proposal ended up being, however, was a normative evaluation of how political reconciliation could occur between Indigenous peoples and their settler colonial states. Ultimately, I argued that for political reconciliation to end legitimating settler colonial states, Indigenous citizens must be able to exit the process and reclaim their lands, should reconciliation fail or prove undesirable.

My research process was fairly routine: I commuted to my office(s) and did research at my computer most of the day. My university has an incredible tradition of taking tea twice a day, and I took advantage of that. It was a great opportunity for me to get feedback from professors and other students of all philosophical backgrounds in a friendly and casual environment. I also gave several research presentations, including a talk at the U.S. Embassy in Canberra and a TEDx talk, and was a pro bono tutor (i.e. graduate assistant) for an Aboriginal and Torres Strait Islander history and culture course taught by ANU’s Centre for Aboriginal Economic Policy Research. I was also a visiting research fellow at the University of Canberra Centre for Deliberative Democracy and Global Governance. From time to time, I was also able to meet and discuss issues with indigenous leaders and activists throughout the country—even spending a couple weeks in a remote indigenous reserve—as well as with members of the Prime Minister and Cabinet’s Indigenous Affairs team. 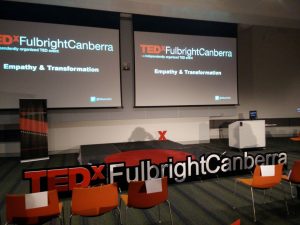 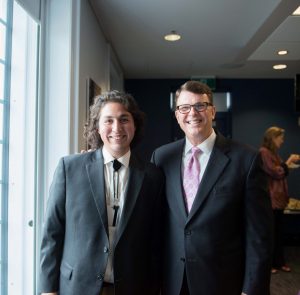 Caption: Vince at TEDxFulbrightCanberra, and with former U.S. Ambassador to Australia John Berry.

3. How did your identity play a role in your Fulbright experience?

Vince: My identity as a Navajo was absolutely crucial to my Fulbright experience. A lot of the experiences I described above were available to me solely because I was an Indigenous person from the United States. The Indigenous peoples of Australia were just as eager to learn from me as I was from them! For example, I was invited to tutor a course in Aboriginal history and culture in order to share my experiences as an Indigenous person from the United States. Similarly, I was invited to spend time on a remote Aboriginal reserve, where I saw firsthand the impact of Australia’s Indigenous education policies. I was able to share my own experiences about U.S. educational approaches on Indian reservations. 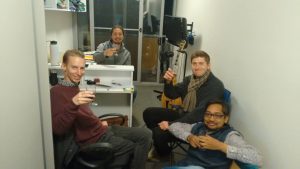 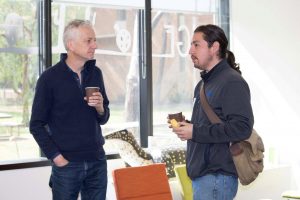 Caption: Vince having dinner and hanging out with his philosophy friends.

4. What is your biggest takeaway from your Fulbright?

Vince: That indigenous communities across the world should be working together. We share so many historical similarities and are working to fight so many of the same battles every day. I truly believe that if we work together and learn from each other that we can do more than just persevere, we can thrive! 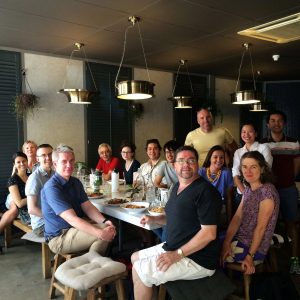 Caption: Vince (center back) sharing a meal with co-workers from the University of Canberra’s Centre for Deliberative Democracy and Global Governance.

5. What impact did your research or studies make in your career and local communities?

Vince: My Fulbright experience has had a tremendous impact on my life. It spurred me to go to law school and focus on Federal Indian law, but it also encouraged me to redouble my volunteer efforts working with Native American youth in the southwest United States. Currently, I run a professional alumni mentoring and scholarship program for Native students at the University of Arizona. Since taking over the program, I’ve been able to recruit a larger alumni community to mentor Native students and raise more scholarship funds for our students. My volunteer work collaborates with administrators to create mutually beneficial policy, and my experiences in Australia gave me the confidence to navigate and advocate in that arena.

6. How can native/indigenous students be supported and included in international education?

Vince: Fulbright should be more persistent about reaching out to Tribes, Tribal colleges, and international Indigenous communities about Fulbright opportunities. These connections are important not just for promoting Fulbright, but also for helping Indigenous students once they are abroad. Although Fulbright played a role in helping me make connections with Indigenous peoples in Australia, those connections were always indirect (e.g., a Fulbright alumnus introducing me to someone). Given Fulbright’s expansive alumni network and name recognition, I would like to see it strive to make those connections more directly.