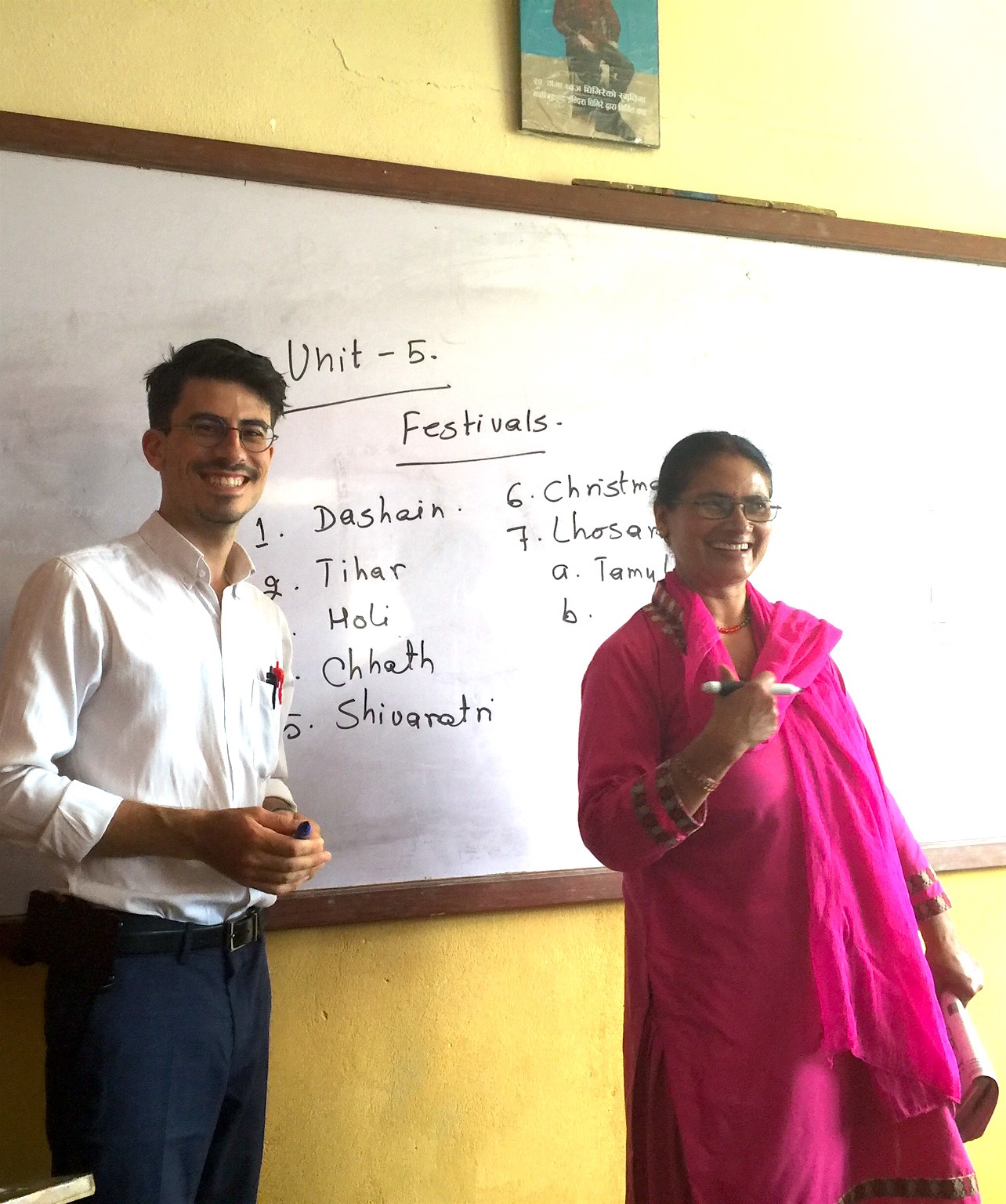 My interest in culture and religious studies began during my early years of high school when I started exploring Eastern philosophies. Determined to find answers to my many questions, I went on to study psychology and religious studies in college. Once there, one of my favorite experiences took place in the spring of 2014, when I helped organize my campus’s first Holi celebration. Exposing students to traditional South Asian culture while having an overall great time, made it a huge success. Later that year, Professor Meetu Khosla from University of Delhi, a cultural psychologist on a Fulbright-Nehru grant in the United States, gave a lecture at my school. Fascinated by her research, it was at that moment that I decided to go to South Asia. Knowing Nepal as Siddhartha Gautama’s birthplace inspired me to begin here.

When I applied to be a Fulbright English Teaching Assistant in Nepal, I didn’t know what to expect. I wasn’t entirely sure about what my assignments would entail, but I was eager to live in Nepal. The eagerness was twofold: I was ready to feel my way around a proper classroom and was also excited to immerse myself in the country’s religious communities.

By early March, I had arrived. In hindsight, the first month in Nepal was a particularly special time for me. During this time, I was adjusting to my routine, and everything felt new. It also coincided with some of the most important religious holidays of the year in the region: Shivaratri (the Day of Lord Shiva), Holi (The Spring Festival of Color), and Nepali New Year.

Shivaratri occurred the second week into my grant. I had heard stories about the hundreds of thousands of pilgrims who visit the holy site of Pashupatinath, but nothing could have prepared me for the enormity of the occasion. That day, every single one of my senses was bombarded. I mingled with pilgrims and Sadhus, observed the sacred and ceremonial cremation of bodies along the holy Bagmati River, danced with priests to the mantras of Ganesh, and took blessings in the form of a red tilaka on my forehead. It was a surreal experience. Participating in Holi with the people in my neighborhood was just as incredible.

When my Fulbright orientation ended, I was anxious to meet my homestay family and start assistant teaching English. At first, I was nervous about having a co-teacher, thinking it might create more obstacles than benefits. I couldn’t have been more wrong. Teaching alongside Ms. Maiya, an English teacher with more than twelve years of teaching experience, has been a great experience. We learn from each other, constantly sharing anecdotes about our respective cultures. Completing each other’s sentences and building off of each other’s lessons, we work incredibly well together. I am always learning from her. For me, she is not just a colleague, but also my guru.

Fulbright has given me the opportunity to explore my passions and also provided unique and valuable experience as a first-time teacher in a formal classroom scenario.

My advice for prospective Fulbrighters is to prepare well for your time abroad, but don’t overthink it, because many of its best aspects simply can’t be anticipated!