I began to help teachers in different classes and was surprised to see that students often spoke while the teacher was talking. This surprised me because at my school in the United States, you are normally never supposed to talk while the teacher is talking, and you might get in big trouble if you did. When I started teaching, I made this very clear to my students! They were very interested to learn about what school in the United States was like because they have seen so many American movies. Can you think of any movies about American schools? What stereotypes were conveyed?

While I expected German students to be very disciplined, they expected all American students to play sports and musical instruments. They thought that the importance of sports often outweighed the importance of academics in the Untied States. I was interested to hear my students’ ideas about Americans and they were interested to learn about what Americans (the ones I know at least) thought of Germans. Of course, there are the basic stereotypes, like that all Germans wear dirndls and lederhosen (remember what they look like?) and that all Americans eat McDonald’s for every meal. However, what we discovered is that we actually are not so different from one another. We listen to a lot of the same music, like Beyoncé and Adele. We like the same movies and TV shows, and we can all agree on the importance of learning another language!

This is what I love about traveling. My students and I came into the classroom with preconceived ideas about each another. After many interesting conversations, however, we not only learned how alike we are, but we also were also able to learn from each others’ cultures! What did I learn from my students? Well, I have learned about their commitment to and enthusiasm for learning other languages.

This is something that is encouraged by the German school system where I teach and, in my opinion, is something we could all learn from (you are already doing a great job by showing interest in new places!). What did my students learn from me? They learned that Americans are just as committed to learning as they are to sports, and that sports help teach important skills like leadership and teamwork.

The best part about my experience abroad is that I keep learning new things every day. I also keep sharing knowledge about useful skills, like how to give a good speech or present fun information about American holidays. I think that if every one in the world were able to understand someone else’s perspective and look beyond the stereotypes, we would have fewer conflicts. I am sure that one day you will be able to experience this too, as will my wonderful students in Germany! 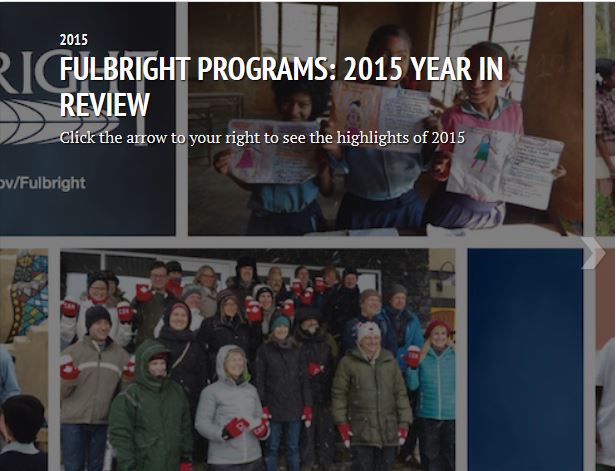 2015 Was a Great Year for the Fulbright Program