When I decided to apply for a Fulbright U.S. Student grant, I chose Brazil, and in particular, Curitiba, because of its strong Asian-Brazilian community. I thought that my Japanese-Okinawan heritage and cultural background would be a way to connect with Curitibanos. Yet I quickly realized that instead of creating connections, it often made me feel isolated.

It was difficult adjusting to the racial climate of Brazil where, in stark contrast to the United States, people are not very sensitized to race issues. For example, people pulled their eyes at me as a way to tease me or establish familiarity with me, like, “You’re Japa,right?” (pulls eyes). People asked Laura, who is Chinese-American, if she was my sister. Men on the street cat called me, yelling “Japa!” and touched my hair.

So Laura and I decided to give voice to these racial issues by creating Racialeyes, a project dedicated to further understanding the Asian-Brazilian community in Curitiba, Paraná. Our project was born out of the desire to dispel harmful stereotypes and educate people about the diversity and richness of the Asian diaspora in Brazil. While eyes are often pulled back at us to mark us as “other,” this project seeks to re-appropriate our racialized eyes, diversify the dialogue about Asian-Brazilians, and make us question our instinct to mark different as “other.”

We interviewed 14 Brazilians of Asian descent, people that we met at the universities where we worked, friends, and members of the Nikkei Clube, a community space for Japanese-Brazilians. Our interviews posed questions about family history, cultural pride, racism, gender/sexuality, self-identity and how interviewees were perceived by Brazilian society. Our logo, designed by a Japanese Brazilian artist Henrique Obuti, combines an ensō and a pinhão seed. The ensō, a Japanese symbol representing creativity and harmony between mind and body, while the pinhão, a seed native to the state tree of Paraná, represents a sense of belonging and the Asian diaspora taking root in Brazil. At the Fulbright Mid-Year Seminar, we presented our project as a part of the People of Color Collective, which was founded by our Fulbright cohort in Brazil to create a platform for Fulbright Scholars of Color to share their experiences and offer support in navigating this unique culture. We also organized a launch party for the e-book, where some of the participants were able to share their experiences and reflect on how the project changed their conceptions about their Asian-Brazilian identities.

In March 2016, we launched a short video, e-book in English and Portuguese, survey on beauty standards, and a website curating our project. We are thrilled at the support the project is receiving and have talked about launching a similar project in the United States. Our role as Fulbright cultural ambassadors is to share the full spectrum of American experiences and we are eager to see what future Fulbrighters will do to diversify the idea of what it means to be American. We encourage them to use their side projects to connect with their host communities and explore their experiences and roles as cultural ambassadors both creatively and meaningfully.

Mia Yamashiro is a 2014-2015 Fulbright English Teaching Assistant, currently working as a marketing/licensing assistant at an anime startup in New York City. She is actively involved in the Asian American community, exploring and promoting the celebration of rich cultural exchange.

Laura Li is a 2014-2015 Fulbright English Teaching Assistant, currently studying Portuguese at the CELIN center at the Universidade Federal do Paraná. She graduated from Oberlin College in Politics is planning to work in higher education and politics when she returns to the U.S. in September 2016. 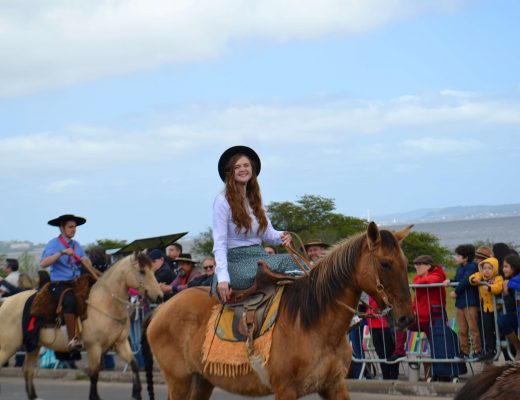