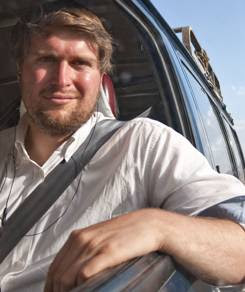 As a scholar of the development of book technology, I have spent a lot of time studying physical objects and wondering about the mindset craftsmen had while producing books in the Ancient and Medieval periods. Since the production of manuscript books in Europe died out centuries ago, it is impossible to ask the producers about their techniques. The tradition of manuscript production that exists (in a reduced state) in the Islamic world is different enough from the one practiced during historical Christendom to limit its utility for the study of traditional European bookmaking. That is why I was excited, during the course of my research, to discover that manuscript bookmaking still survives in the Christian highlands of Ethiopia; it was simply a matter of getting the time and funds to go.

My Fulbright research project, Ethiopic Manuscript Culture and Its European Analogues, documents the remaining craft and tradition of book production in Ethiopia, and applies that knowledge more broadly to the history of book production in Europe and the Mediterranean world. Ethiopia was isolated from the Muslim conquests until the 20th century. As a result, it maintains a largely 4th-5th century style of book production. Additionally, it served as a bridge between the Mediterranean and Arab worlds: the traditional Islamic codex (like the modern book format) is based upon a form learned from Ethiopia, so comparative codicology (the study of books as physical objects) in the two traditions could help shed light on historical innovations in book production.

Based upon my interviews, I have attempted to gain insight into the mindsets of traditionally trained scribes and parchmenters, even learning a bit about magic writing and scroll-production along the way! The interviews have taken me through a large swath of the country; from towns to the remote countryside, bringing me into contact with many interesting people, some of whom I have interviewed and photographed. There has also been a great synergy between my field research and photography.

I had to apply twice to be awarded a Fulbright grant, so my primary advice to applicants would be, “Be persistent.” The second time I applied, I spent a lot more time preparing by briefing my referees on the nature of the project and allowing more time for revising application documents. I think the time spent working on the application, the additional research and the language preparation I undertook all helped. I would encourage potential grantees to start early and to take their time during the application stage. 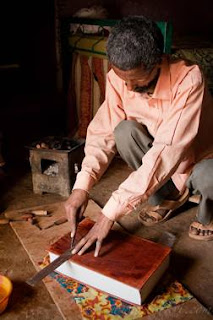 Marigeta (a type of priest) Birhanu decorates a leather cover on a modern printed book. 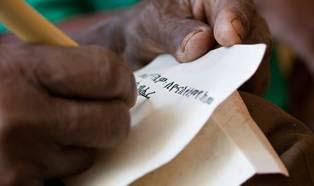 The hands of Marigeta Haile Selassie using a bamboo pen to write characters of the native syllabary (called ‘Fidel’) of the Ge’ez language used by the Ethiopian church.

Top photo: Sean Winslow taking advantage of dry season conditions to travel around Tigray, the Northern Province of Ethiopia; Sean’s research focuses on the technological development of the book. During his Fulbright project, Ethiopic Manuscript Culture and Its European Analogues, he interviewed Ethiopia’s last Christian scribes to gain insight into the mindsets of traditional book producers.