In a U.S. election year, anything can happen. Understanding the processes behind U.S. campaigns, media relations, and voting are not only highly relevant, they’re vital for the next generation of informed global leaders and scholars.

The 2015 Austin Fulbright Enrichment Seminar, held in Austin, Texas, brought exactly these ideas to the forefront of discussion on December 10-13, 2015. Over four exciting days the 132 foreign Fulbrighters convened to explore U.S. political values, electoral process and traditions, the current presidential campaign and the role media plays in politics, specifically related to elections.

The Fulbright program sought out the expertise of the University of Texas-Austin and The Texas Politics Project’s Director, Jim Henson to facilitate discussion and deliver insights from ­­academia and civil service.

During the keynote address, held at the University of Texas-Austin’s Etter-Harbin Alumni Center, Fulbrighters were presented with an analysis of the current U.S. presidential election and campaign. The seminar also included a moderated panel discussion that explored media and its role and responsibility related to election coverage, including how it influences and shapes public opinion and political discourse.

Through these activities, Fulbrighters developed a better understanding of U.S. contemporary life and culture, the electoral process and U.S. public attitudes on an array of important political issues.

We certainly enjoyed seeing you in Austin!

This weekend, from February 4 through February 7, 2016, Fulbright Students from 71 countries will explore the same theme, “Democracy in Action,” in Atlanta, Ga. Stay tuned for a blog post and photos shared by student participants through the Fulbright Source, next week! 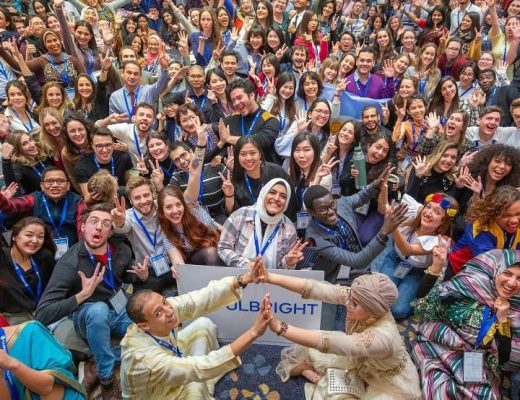