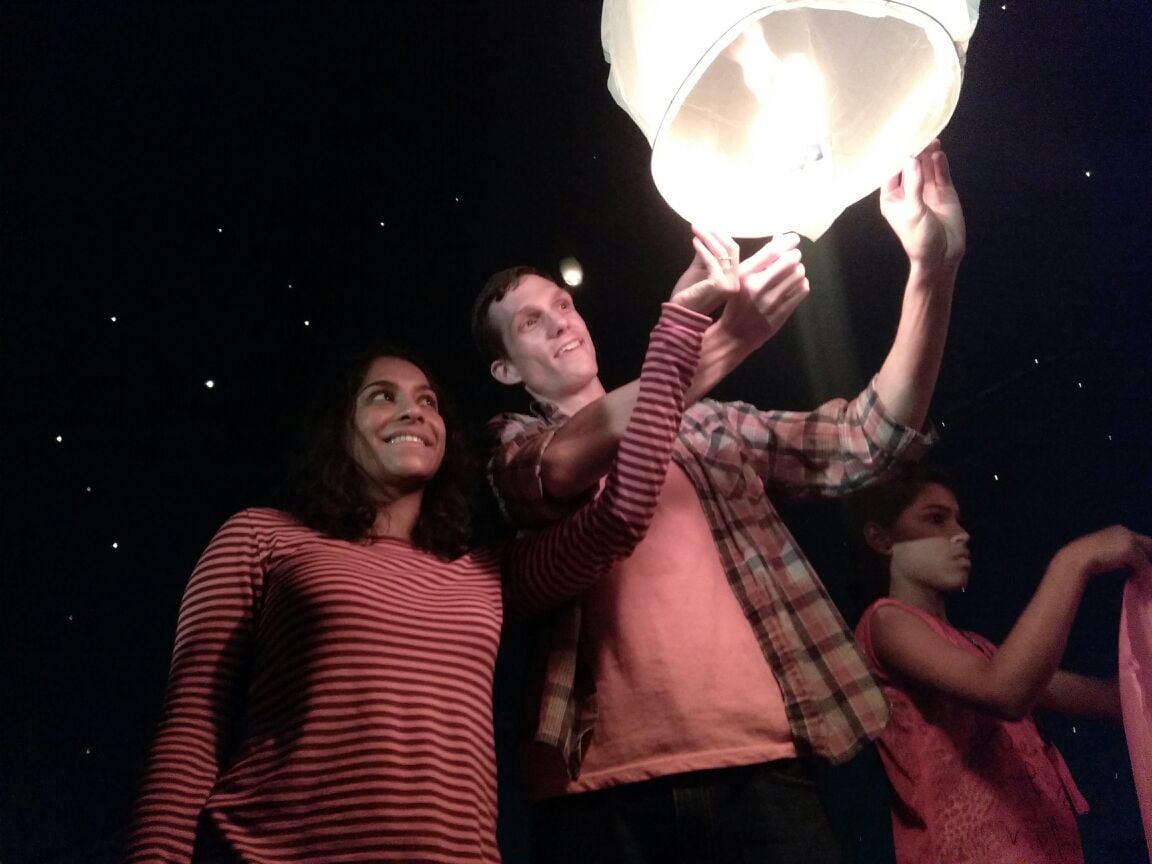 We all know that receiving a Fulbright grant is a rare honor. When I received mine, I was ecstatic! But sometimes, you just have to throw it to the wind. Let me explain.

Every year in January, the city of Ahmedabad, India, has the International Kite Festival. During the Hindu holiday of Uttarayan, millions of Gujaratis spend an entire weekend flying kites! Mothers, children, uncles, doctors, grandparents and priests all unite on rooftops and open fields to celebrate. Absolutely no one is too cool to fly a kite. The sides of streets and shop fronts are lined with kites of all colors and fabrics, children with fistfuls of change buying kites by the dozen. Each kite is unique, some even displaying the faces of Bollywood heroes and heroines. Each string is delicately encrusted with crushed glass, so that kite pilots can tangle their strings until one is cut through, leaving the opponent to suffer a slow descending death. Kite fight! The sky is a battlefield, but you’d never suspect it by the joyous faces and comradery below the strings.

Let me rewind. While living in Ahmedabad, I spent roughly a year researching climate change adaptation and vulnerability of Gujarati agriculturalists. In collaboration with the esteemed Indian Institute of Management-Ahmedabad, I conducted over a hundred interviews and household surveys from three different agro-climatic zones of the state. In particular, we were interested in discovering the impact that institutional assistance had on adaptive capacity. The breakneck pace of fieldwork often left me returning to the city breathless, albeit intellectually electrified. In Ahmedabad, my wife and I were lucky enough to become friends with a gregarious group of cosmopolitan twenty-somethings that would ensure we were never lonely.

After a few weeks of remote fieldwork, they insisted we join them in celebrating Uttarayan in historic Manek Chowk. Our rickshaw effortlessly circumnavigated the impossibly frenetic tangle of engines, wheels, feet, and hooves to arrive in what seemed like a labyrinthine maze of narrow alleys cutting into buildings so tall and close that not even the sun hit the pavement. We knock on an ornately carved door after walking several zigzagged blocks and giggle to ourselves in anticipation of the day. Once ajar, the door revealed a dense genealogy of loquacious strangers and intoxicating smells. Countless new friendships forged, my stomach stretched beyond capacity with a seemingly infinite variety of fresh savories and sweets. Even before I could finish chewing, we were pulled up five flights of a narrow staircase. We emerged onto a deafening rooftop with even more people, all of them flying or tying kites. The sky was alive with color. Describing the scene as “magical” does not do it justice. It was a display of unrestrained merriment and brotherhood, unlike anything I had heretofore experienced. Concentrated attention enhanced the jubilation, shrieking hoots followed the untimely death of another cut kite. Much to my chagrin, I became the instant victim of another’s glassy string. And again, and again, and again. I must have wasted a child’s small fortune in papier-maché mishaps. I’m told that the trick is in the yank, but I suspect that I’m beholden to different laws of physics.

Just as the sun set, the whole terrace erupted into swirling folk dances and singing. Concentric circles dilated and swallowed me alive until I found my footing to keep in step. From the periphery, I see a colorful fire floating into the dark night. I looked up to discover what seemed like a vast ocean of floating jellyfish. Vibrantly colored paper lanterns were lit from each rooftop and surrendered below the stars, like panoptic ghosts of downed kites. Another one up, another whoop. As the dancing subsided, all eyes gazed skyward in awe of an entire cityscape illuminated. The din was replaced with a mystical silence that stood my neck hairs on end. When I reflect on this day, it felt like being in love with an entire city. The next day, I awoke to do it all over again.

Beyond the prestige, Fulbright can be stressful, it can be scary. The imperfect method, the uncertain research findings; ambition and doubt always in competition. But sometimes you just have to unwind. A word to the wise: if you’re ever strung out on Fulbright, get lost and throw it to the wind. Just don’t let go of that string!

Have questions for Ryan about his Fulbright experiences in India and as a Fulbright Alumni Ambassador? You can reach him at RStock.alumniambassador@fulbrightmail.org.

Are you applying for a Fulbright grant in creative writing? If so, hear how author Jonathan Franzen’s Fulbright grant to Germany continues to have an impact on his work.