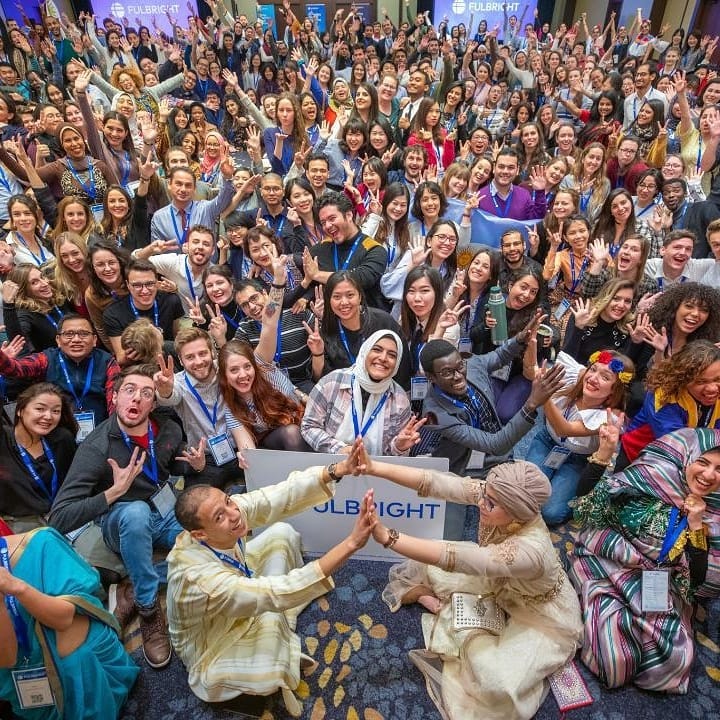 By Léandre Larouche, French Foreign Language Teaching Assistant, Canada
I did not expect the end of the Fulbright FLTA mid-year conference to feel so weird. The conference, organized by Fulbright, gathered all 400+ Foreign Language Teaching Assistants dispatched across the United States in the Marriott Marquis in Washington, DC. The goal of the mid-year conference was to get all FLTAs together to reflect upon their experience, learn together, and share what they have learned. While the conference’s primary goal may have been intellectual, it was also emotional and personal on many levels. Our learning experience goes beyond our roles as FLTAs; it also teaches about ourselves, about other people, and about all the different countries, languages, and cultures represented in the Program. I am experiencing this personal aspect first-hand as I find myself seized by a sense of emptiness at the dusk of the conference. Still in Washington, DC for one more night, I’ve said goodbye to most of my fellow Fulbrighters and wish this conference lasted just a little longer — or at least that I could spend more time getting to know its participants.

The French from the Old World

I’ve been fortunate enough to be a Fulbright Program participant twice — as well as an exchange student. These experiences allowed me to attend several events where I’ve met people from across the world and got to know them for very short periods of time. Yet this time — and perhaps more than any other time before — I feel sad, almost heartbroken, that this conference came to an end. The past week spent in Washington, DC, was possibly the most enriching and fun time in my life. The people I’ve met there where some of the funniest, smartest, and most accomplished people I’ve met. Perhaps most importantly, too, I got to know more of my fellow French FLTAs — who are all from France, as I’m the only French-Canadian in the Foreign Language Teaching Assistant Program. They managed to make me love their country more and spurred my desire to further discover it. They also strengthened my love for the language we share and increased my awareness of its diversity.

French, indeed, is a colourful language, a language full of metaphors, images, and wonderful, sometimes ridiculous expressions. The best part of it is that it changes from one corner of the world, even one part of a country, to the other. I taught my expressions to the French FLTAs; they taught me theirs — and we’ve laughed to tears in the process. The relationship between Québec and France can be a tricky one; I haven’t always felt like people from France treat people from Québec and their language as equals. But these French people, as good representatives of their country as they are, made me forget these sometimes bitter feelings. Few are the times in my life where I’ve had as much fun and learned so much about a nation. If I were to take just one thing away from this conference, it would be that individuals have the power to influence countries’ relations. Who knows where we all will be ten, twenty, and thirty years down the road? Who knows what kind of impact we will be able to make?

The Fulbright Program’s goal is to help the U.S. State Department achieve diplomatic objectives by facilitating exchange programs between the United States and the rest of the world. Not only is it succeeding at this objective, but it is also succeeding at doing so for other countries. When I go back home to Canada, I’ll remember not only the interactions with Americans, but also those with the French people and the 40 other nations represented at the conference. My mind was opened wider more times than I can count. For example, I met the first Fulbrighter from the United Arab Emirates, who opened my mind to a country I knew next to nothing about. The fact that a Fulbright Commission was launched in that country a few years back has already had a tremendous impact — on my life, just as on that of many other people. The results may be invisible for now, but their effects will be made visible sooner or later.

Of Emptiness and Confusion

The time spent with the French people and other Fulbrighters from across the world, as we exchanged ideas in conference rooms, ate in restaurants, drank in bars and hotel rooms, I regard as rare and precious. I think I’m going to miss it seriously. I’m lucky to be living an extraordinary life as a Fulbright FLTA in Williamsport, PA — a life I would never take for granted. Nonetheless, it’s hard to think of going back to the routine next semester after living such an intense weekend. I’m going to be travelling around the United States throughout the Christmas break, and I’m going to see some of the people I’ve met here as I do so. Still, the feeling of being surrounded with more than 400 other people like you who love languages, love people, love the world, and wish for a better, more tolerant future is priceless and, frankly, difficult to get over. As I write these lines, I feel as though there is a hole in my heart. I feel as though I’ve lost something I’ll never get back, no matter how bright the future might be.

I know, however, that Fulbright is forever and that the friendships it creates are made to last. In many cases, we said goodbye but not farewell—and I know full well that this is only the beginning of a life filled with such experiences. While in Washington, DC, before the conference began, I hung out with a friend I’d met during the 2017 Youth Institute for Canada in the World, another Fulbright event. It felt like nothing had changed. And some of the people I’ve met this weekend, I was already acquainted with from our summer orientation in Fayetteville, AK. Nothing had changed with them, either. We picked up our conversations as if we’d never been apart. When people are bound together by an organization like Fulbright — meaning they share a similar vision of the world and certain fundamental values — they can feel as though they’ve known each other forever, and the connections they share are as strong as they can be. As a result, it feels bittersweet when the time comes to say goodbye — sometimes even lonely. But such a sense of emptiness is simply the price to pay for these extraordinary experiences. Nothing meaningful comes without a sense of loss when it ends; people keep moving forward and use what they have learned as they do so. They try as they might not to compare the present to the past and compartmentalize these events. Such is the beauty of programs like those of Fulbright: they teach how to handle the extraordinary, all these exceptional encounters with people all special in their own ways — and to move on with our lives once it’s over.

Even though I’m well aware that the sadness won’t last — I know that in a day or two, it will turn into something more pleasant — I still embrace this uncomfortable feeling. Because I know it is the right thing to feel after a life-changing experience. There is nothing abnormal with feeling this way; this is how things should be. And I can only hope that all the other FLTAs feel more or less the way I do, that they too had an extraordinary few days in the United States capital city. And I can only hope, too, that more people feel this at one point in their lives, that they experience extraordinary events and programs, like those of Fulbright. International education and professional opportunities are blessings one should strive to get at least once in their lifetime. There’ll be moments of emptiness and confusion, but this is how we know that we’re doing something right.

Volunteer One Day, Come Back with a Basket Full of Understanding: A Vietnamese Fulbrighter Learns About Civic Engagement in the United States