Promoting Peace over Breakfast: My Fulbright Year at the Diplomatic Academy of Vienna 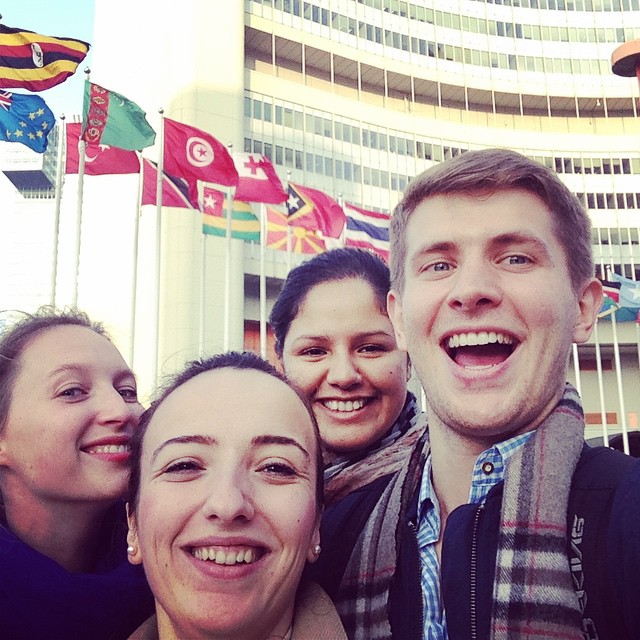 Elvia Valle, 2014-2015, Austria (second from right), at a conference at the United Nations in Vienna about social change with colleagues from from the Diplomatic Academy of Vienna representing Austria, Romania, the United States and the United Kingdom.

In the fall of 2014, I began attending the Diplomatic Academy of Vienna in Austria as a Fulbright Study/Research grant recipient. During my time here, I had been participating in the Academy’s Diploma Program, taking classes in many diverse topics: political science and international relations, the structure and functioning of international organizations and the European Union, economic and international economic relations, international law, institutional European law, contemporary political history, and language training in French and German.

During the week, I woke up in the morning and headed downstairs for breakfast. Usually, there were already students representing several countries such as England, Serbia, Moldova, Ethiopia, and Kazakhstan, to name a few, in the dining hall discussing social phenomena, cultural stereotypes, or recent international developments. Often, we also have the privilege of sharing such conversations with visiting professors. One need only come to breakfast to realize the commonality that brings us all together—a true desire and passion for making this world a better place.

As a city, Vienna is a fascinating place for an aspiring diplomat. My time there has been marked by two very important commemorations—the centennial of the start of the First World War and the bicentennial of the Congress of Vienna, both of which have had a profound impact on European history. To honor the former, the Diplomatic Academy held a conference to discuss historical counterfactuals, “what could have been,” which taught me about the social cleavages that existed in the Austro-Hungarian Empire long before the fateful shot that killed Franz Ferdinand. Through our discussion, I learned that such thoughts have current relevance as Europe grapples with problems of integration.

The latter, the commemorations for Congress of Vienna, have been a wealth of knowledge for the evolution of diplomacy. Once a profession only for the privileged and wealthy, today’s aspiring diplomats, at least in the United States and Austria, must not only be well-qualified, but also have a strong desire to serve their countries. Through attending numerous talks held by foreign diplomats, such as France’s ambassador to Austria, Pascal Teixeira da Silva, I have witnessed time and again the character traits (composure, humility, cultural adaptability, and several others), which make great leaders.

Because the Diploma Program typically comprises Austrian students seeking entry into the Austrian Foreign Service, it was personally captivating to see first-hand how the selection of diplomats is done in another country. Not only did this experience increase my interest in the American Foreign Service, it also motivated me to apply for a Thomas R. Pickering Fellowship, which I received in May 2015.

I chose to commit to a career in the American Foreign Service due to my particular interest in American Public Diplomacy, of which the Fulbright Program is a part. I hope to build my career around the promotion of mutual understanding between the United States and the world, because it is the single most important facet of any foreign policy seeking to promote peace.

Thinking of pursuing law school but not sure if Fulbright is right for you? Listen to Fulbright Alumni Ambassador c, 2009-2010, Barbados, describe his project.