Inviting the World into U.S. Classrooms

Michelle Martin-Sullivan’s love of languages began—as many lifelong passions do—with a great teacher. In Nadia Yousfi-Roy’s high school Spanish class in Dallas, Texas, Michelle quickly grew passionate about (and fluent in) Spanish. She recalls, “I saw the life that Ms. Yousfi-Roy was able to live because she spoke so many languages and had lived in such interesting places, and I want that for myself.” Michelle spent a summer increasing her fluency in Costa Rica. After returning home to Texas, she embraced the opportunities presented within her community to learn from native speakers. “Growing up in Texas can be a Spanish-language immersion experience if you look for it,” Michelle says. When Spanish became second nature, she accepted a new challenge from 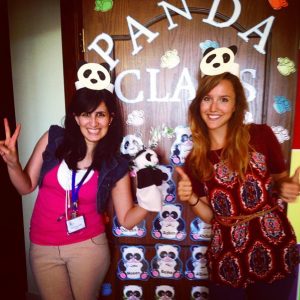 Michelle and a colleague outside her kindergarten classroom in Jordan

Ms. Yousfi-Rou to honor the other half of her Spanish/Moroccan heritage by taking up Arabic. “I expected to pick up Arabic just as quickly,” Michelle said, “but I quickly learned otherwise.”

As an undergraduate at West Point and The University of Michigan, Michelle dedicated herself to the study of Arabic. Upon graduation, she moved to a small town outside of Amman, Jordan, where she taught kindergarten for a year and continued to practice her language skills. She loved the complexity and challenge of Arabic. By the time she moved back to the U.S. in 2015, she had finally achieved an intermediate-to-high level of proficiency.

Seeking to use her teaching experience, Michelle joined Teach For America in Appalachian Kentucky and spent the next two years as the Spanish teacher at what became Floyd Central High School in Floyd County, Kentucky. She loved the people and the area so much that she has made it home. “For most of my life, I’ve wanted to be somewhere else,” Michelle says, “but my wanderlust never kicked in here. Our small community is tightly knit with a great family feel.” 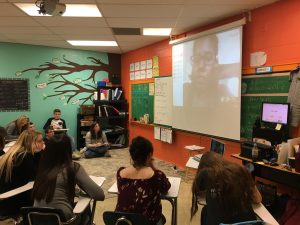 Students in Kentucky get a glimpse out a traveler’s window

Finding that her students wanted to learn more about the world, Michelle began welcoming Fulbright travelers from all over the world into her classroom through a partnership with Reach the World, a non-profit organization that facilitates virtual exchanges with K-12 classrooms across the U.S. Says Michelle, “Teenagers tend to naturally push back on where they grew up, and they want to learn about where they’re not from. It’s such a great privilege to be able to introduce them to new cultures at this point. It’s a real eye-opener to interact with and get along with someone abroad who is so different than them.” During regular video-calls with Reach the World/Fulbright travelers, students apply the technical skills they’re already familiar with to new challenges, such as conversing in Spanish via Skype and reading reports about new cultures by their Reach the World travelers, translated into Spanish.

In addition to expanding their global mindset, Michelle’s students love to share their pride in where they’re from, jumping on the chance to bust stereotypes. “The experience of having to consider a different way of life raises the question, ‘How do I explain my culture to someone else?’ Michelle says. “Fulbright travelers show a genuine interest in where the students are coming from, and it makes for some very meaningful exchanges and relationships.”

Having worked with several Fulbright/Reach the World travelers in Spanish-speaking countries around the world, Michelle takes pride in the impact global education has had on her students. “I had 15- and 16-year-old students who already know that, when they graduate from college, they want to be Fulbright scholars. Many of my students have found mentors in the Fulbright travelers they’ve met through Reach the World, and they stay in touch long after the classroom exchange is over. They’ve learned that it’s financially possible to study abroad through organizations like The Fulbright Program. A former student is about to spend a semester in Italy and a summer in Peru, and on top of her Spanish major, she just picked up Hebrew and Arabic. Some of my students grew up without internet in their homes, and now, the world is literally their oyster.”