Found in Translation: Investigating and Comparing the Japanese and American Stigma Associated with Schizophrenia , By Misty Richards, 2009-2010, Japan

People in Japan are polite. The traditions and history are rich. Efficiency is high. The bright lights of Tokyo cast a glow on the serene rock gardens and trickling streams that highlight the beautiful contradictions that resonate throughout the city.

Before I came to Japan, I was trapped in the A to B mentality that medical and/or graduate school tends to steer you towards. Having lived outside of this environment for the past 10 months, I can now look at this type of mentality objectively and see that it may not promote creativity or foster individual development. In my opinion, you need to stimulate new neurons to fire every day in order to come up with the ideas that will lead to important discoveries. This inside-out approach was once novel to me, but it is one I truly endorse now after my Fulbright experience in Japan. I feel so fortunate to be working on the first cross-cultural stigma study between Japan and the United States, specifically, comparing the levels of stigma associated with schizophrenia between the two cultures. The formal title of my projects is, “Found in Translation: A Cross-Cultural Comparison of Stigma Associated with Schizophrenia between Japan and the U.S.” and I am completing this research at the National Center of Neurology and Psychiatry in Tokyo. We are surveying hundreds of American and Japanese physicians, psychiatrists and psychiatric staff, as well as the general public, on their views of those suffering from schizophrenia. It has been an incredibly productive year and we truly hope that the results of our stigma study reach far beyond the pages of an academic journal. In the end, we hope that it will help advocate for those suffering from schizophrenia throughout the world, giving patients the resolve they need to adequately treat their illness.

Furthermore, I have been particularly impressed with the Fulbright conferences I have attended at the Japan -U.S. Educational Commission (which administers the Fulbright Program in Japan) concerning soft power, global relations and diplomacy, as well as talks given concerning the environment and climate change. Japan is a very diplomatic and conscientious country. To be a conscientious global citizen, I have learned that we cannot completely separate our lives from public policy or politics, the environment, other countries, technology and science. I believe these subjects to be imperative if we are to grasp the world’s future direction and to harness our individual potential to initiate progressive change. After all, it is when we open our minds to the global consequences of our actions that we can begin to understand that what we do today will affect future generations.

While living and working in Japan, I have met people from all walks of life. I feel so fortunate to have met so many interesting characters who have contributed to my overall impression that Japan is a wonder. Considering that I work at a psychiatric/neurological hospital, I encounter patients with schizophrenia (“togo shitcho sho”) and mental illness everyday. Moreover, I see patients with severe cases of epilepsy, brain retardation and rare genetic diseases as they try desperately to make their way down the hall. Each step for them is careful, calculated, and seems to take just as much courage as it does energy to execute. These people are my heroes, for they are alive and functioning in a world that may not be as considerate as it could be. The stigma, discrimination and shame that are often associated with such illnesses permeates all cultures and geographic boundaries, which is why it is a global problem to be solved and not one specific to Japan or the United States. We must understand – as scientists, physicians, and human beings – that a major part of healing and understanding brain pathophysiology resonates in comprehending the integration of nature with nurture. We often neglect the nurture aspect of this partnership, which is comparable to looking through a window at the world with the shades only half drawn. Seeing these people at the hospital and learning their stories reminds me that it is essential to open the shades completely to let the sunshine – or lack thereof – stream in.

It has been an incredible experience to learn more about the mental health system in Japan and to compare it with how mental illness is approached in America. I hope that the results of this first cross-cultural study on stigma levels between Japan and America concerning schizophrenia will elucidate ways in which we can help patients live life more comfortably and happily throughout the world.

Photo: Misty Richards, 2009-2010, Japan, with two fellow lab members at the National Center of Neurology and Psychiatry, researching both clinical and basic scientific aspects of schizophrenia.

Breakdown in the Kalahari 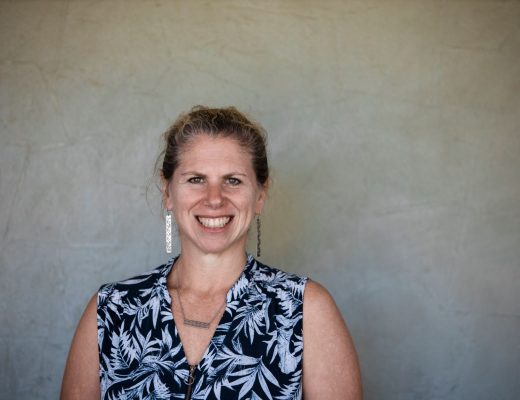