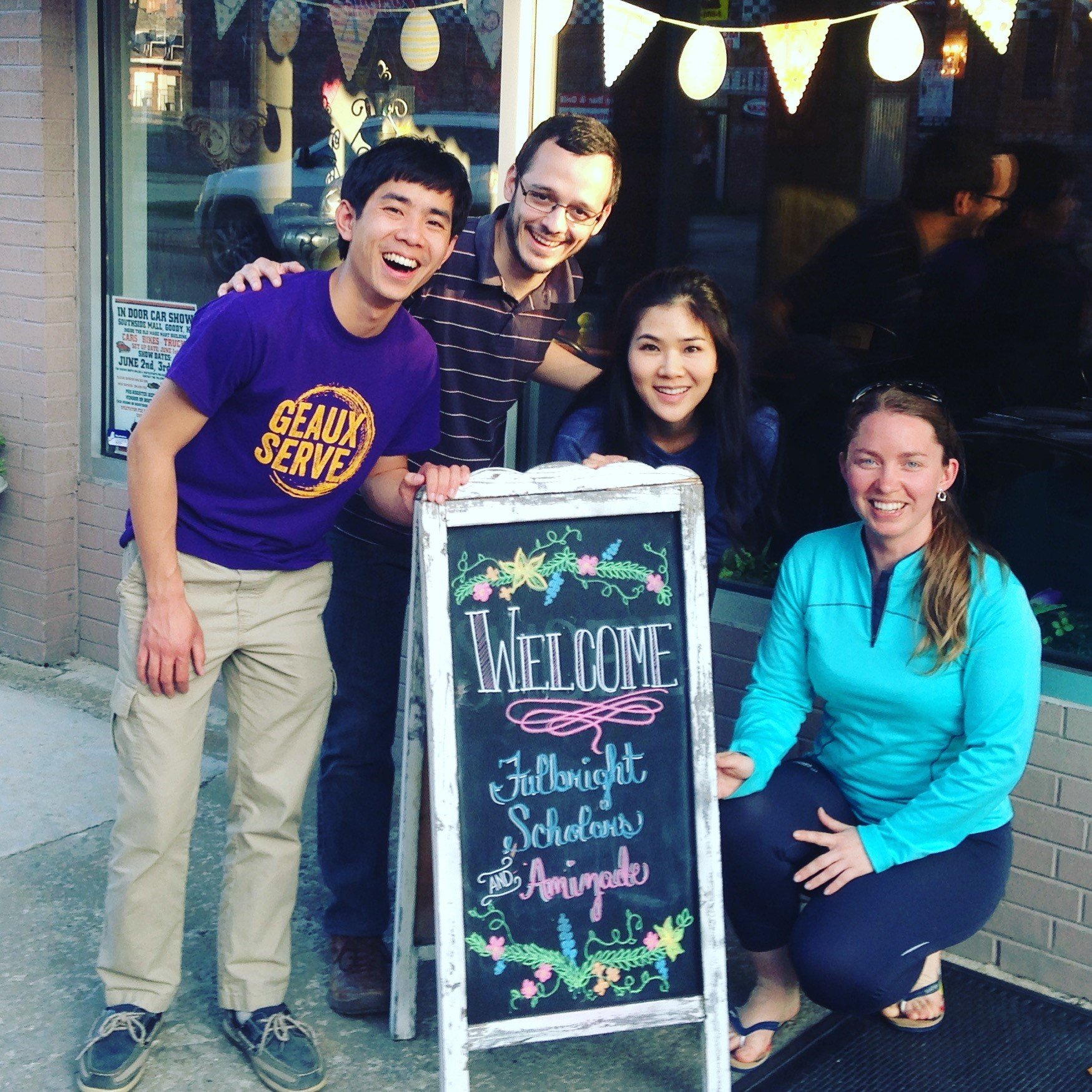 In the small coal-mining town of Williamson, West Virginia lie many gems: the wild and wonderful landscape, the hospitality of the community, and the persistent work of everyday heroes who make miracles there. In Williamson, it does not matter whether you meet an 8-year-old girl participating in an after-school program, a 40-year-old man playing basketball with underserved children, or a 70-year-old beekeeper, you can experience the fact that “giving back to the community” is ageless. During the first week of April 2017, twelve enthusiastic Fulbrighters were able to experience and contribute to the ways in which the residents of Williamson make a difference. We joined local residents in building community gardens, turning rocky mining lands into fertile soil, and teaching the next generation how to give back. This is a thank you note to all of the people who were part of the Fulbright Amizade service-learning project and made an impact on our lives, inspiring us to take our turn to build a better future for the next generation.

END_OF_DOCUMENT_TOKEN_TO_BE_REPLACED There are many stories to be told about Williamson, West Virginia. About Coal Country. About Appalachia. There are stories of drug abuse and diabetes and poverty. Of unemployment and government regulation and presidential elections. Those stories have been told for decades. Those stories continue to be told today by media outlets around the country. They are stories that can be found throughout the country. There are other stories too. Stories of health and wellness and entrepreneurship. Of resilience and revivals and recreation. Of people working to make their communities just a little bit better. Because throughout the country there are groups of engaged citizens identifying problems and finding solutions. These are stories that must be told as well.

END_OF_DOCUMENT_TOKEN_TO_BE_REPLACED

A City Back on Its Feet After a long climb, the view from the top of Death Rock, looking down upon Williamson and the Tug River

It’s just before sunrise and I’m making my way up a steep, rocky slope. A short jog beyond the city’s main drag, the earth begins to rise. Flat streets become steep grades as we climb up, up, into the Appalachian Mountains. The weather is cool as the mountains exhale softly in the morning air. I fall in stride next to Tim Caudill, a Williamson native, trained archeologist, and seasoned ultra-marathoner who has since returned home to carry out research into how best to revitalize the local economy.

This morning, we’ve pulled ahead of the group of us who rose early to hike up to “Death Rock,” a peak overlooking Williamson offering a birds-eye view of the Tug Fork River separating Williamson, West Virginia and eastern Kentucky. For Tim, the roughly five-mile route to the top is easy exercise. In the course of training for a 100-mile race, he logs dozens of miles per week in the surrounding mountains. As we run, Tim shows himself to be a trusted guide for all things big and small. He stops to point out the fossilized remains of plants etched into small rocks. And when we reach the peak, he is quick to gesture toward mined mountaintops and discuss the storied history of the area. Here the closer you look, the more treasures you see.

Williamson is a city graced with grand natural beauty. With over 700 miles of trails, the surrounding mountains are a trail runner’s dream. While many locals utilize the Hatfield-McCoy trail network for All Terrain Vehicle (ATV) recreation, runners like Tim are a less common sight. But times are changing.

END_OF_DOCUMENT_TOKEN_TO_BE_REPLACED END_OF_DOCUMENT_TOKEN_TO_BE_REPLACED

Twelve Fulbright Students from around the world gathered in Williamson, WV, to participate in a service-learning program led by Amizade. As our group was warmly welcomed by the local community, I felt an authentic sense of belonging, where conversations flowed freely and friendships ran deep. What impressed me the most was the people of Williamson. Their sense of community, hospitality, pride and unwavering perseverance to succeed, was not only inspiring but contagious. Due to a series of floods, the coal mine collapse, and lack of employment, Mingo County’s population dwindled from 50,000 to 3,000 residents. Despite their misfortune, residents are uniting as a family to breathe not only life but hope back into their community.

This collective passion is what drives a community to become the best version of itself, and encourages others to join in the revolution. In a way, this devastating crisis has presented a blank canvas for Williamson to rebuild the future they desire. Sustainable Williamson has spearheaded this revolution by taking a holistic approach to challenges faced by this Appalachian community. By reimagining what sustainable agriculture, healthcare, education, infrastructure, and tourism paradigms could be, they are transforming a place back into a home.