Straddling the Gap: How Sharing Diverse Experiences and Interests Can Help You Become a Fulbright Cultural Ambassador, By Katie Walter, 2009-10, India 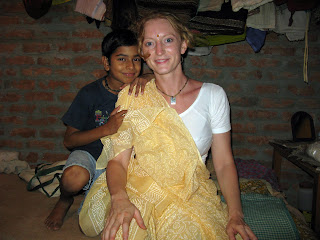 I am in the finishing stages of a Fulbright-Nehru grant that examines conservation initiatives in the pilgrimage town of Vrindavan, Uttar Pradesh, India. My research will offer insight into how to optimize public communication campaigns addressing conservation issues.

My journey has taken me from the narrow, medieval backstreets of traditional-minded Vrindavan, to the town’s mega temples, sprawling roads and luxury housing properties, to the office buildings and affluent areas of the capital city of Delhi. In each place, I have encountered varying degrees of concern over new development projects in Vrindavan: some critique them for helping to increase the number of visitors to the town while the basic infrastructural needs of local residents remain unmet; some believe that these haphazard development projects are a sign of well-deserved “progress;” while others still posit that they damage the town’s natural environment, which needs to be protected in the name of public health, local prosperity, religion and heritage.